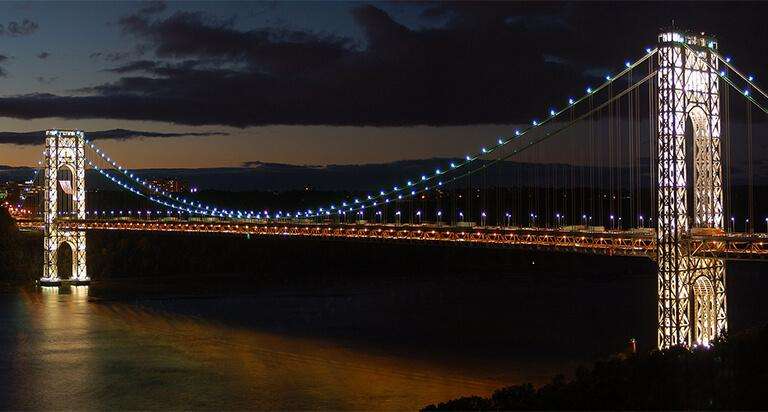 The George: Busiest Bridge on Earth

The Big Apple, the city that never sleeps, is also known as the home of bagels, ballparks, Broadway, the Wall Street bull, Lady Liberty, and almost 19 million people. A geographical jigsaw puzzle, the incomparable New York City is the meeting place of islands, rivers, and the Atlantic Ocean. It’s the epitome of hustle and bustle, with over 1.76 billion public transportation rides annually, and over 4.5 million vehicles moving through the city each day.

It’s little wonder, therefore, that New York is home to almost 800 bridges and tunnels, constantly accommodating the ebb and flow of humanity. And the busiest bridge? The George Washington Bridge. Affectionately referred to by locals simply as “the George,” it carries more vehicles daily than any other bridge in the world. In this installment of our “Bold Bridges” series, we thought we’d take a look at what makes the George what it is, and what the bridge architects achieved.

How did the George Washington Bridge establish Othmar Ammann as “one of the immortals of bridge engineering and design, a genius”?

The Golden Gate Bridge in San Francisco, the Tower Bridge in London, and New York’s Brooklyn Bridge are, perhaps, some of the most famous and instantly-recognizable suspension bridges on Earth, yet the George Washington Bridge — a double-decked suspension bridge — still sees more vehicular traffic than any of its counterparts: over a quarter of a million vehicles per day.

The George measures 4,760 feet in length and has a main span of 3,500 feet. Opened in 1931, it held the title for the longest main bridge span in the world until the Golden Gate Bridge opened in 1937. 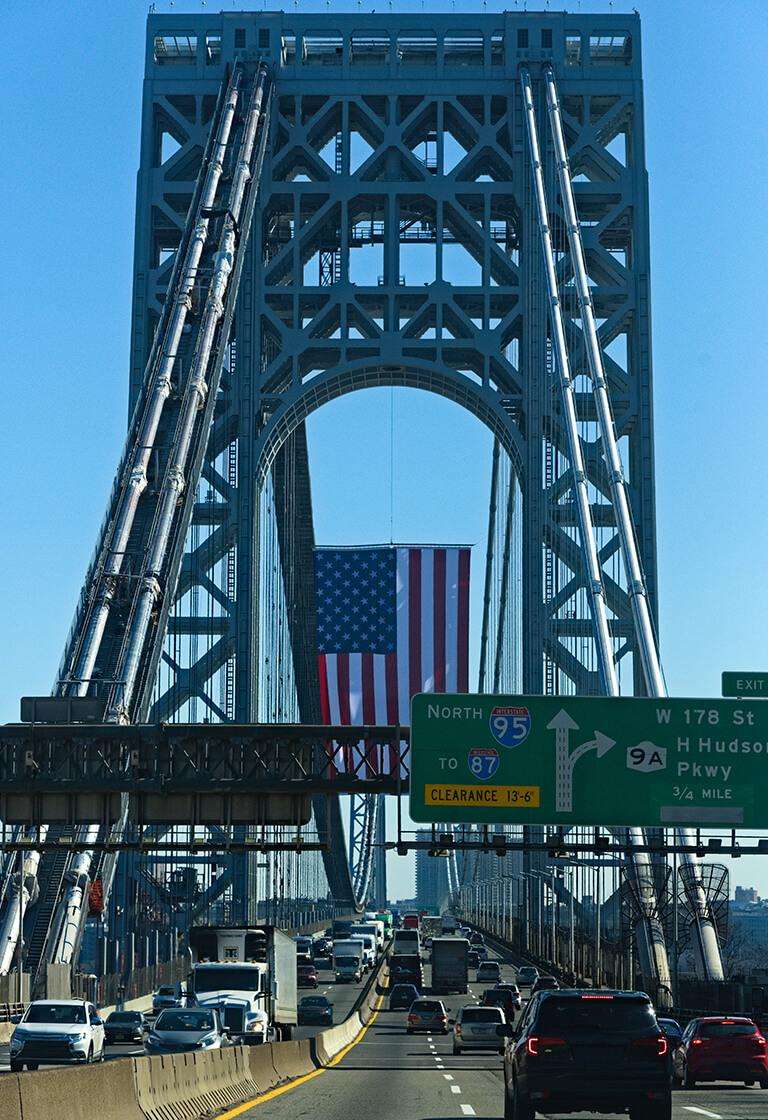 The George: The busiest bridge on Earth, flying the largest flag.

The upper deck is suspended from four main cables which are held up by the 604-foot tall suspension towers. On the New York side, the tower consists of a steel structure on a concrete base, while on the New Jersey side the anchorage is bored directly into the basalt rock cliffs of the New Jersey Palisades.

Each main cable contains 61 strands, and each strand is made of 434 individual wires, for a total of 26,474 wires per main cable. Each main cable measures three feet in diameter and is covered in a sheath of weather-resistant steel. The George relies on a wire-cable design in which the vertical suspender wires are attached directly to the main cables and the deck.

The primary purpose of the bridge is to connect New Jersey with New York City. After the concept of a bridge across the Hudson River was first proposed in 1906, it took 19 years before the state legislatures of New York and New Jersey voted the project into effect.

Construction began in October 1927, with the opening in October 1931. By 1946, the upper deck was widened from six to eight lanes, with the lower deck being built between 1958 and 1962 to accommodate increasing traffic flow.

Lessons from The George

During the planning process, the chief civil engineer, Othmar Ammann, designed the deck based on “deflection theory.” At the time, this was an as-yet-unconfirmed theory that longer suspension decks did not need to be as stiff in proportion to their length, since the weight of the deck itself would act as a counterweight against its own movement.

As a cost-saving effort, instead of relying on stiffening trusses, a system of plate girders was installed on the underside of the upper deck. It worked so well that it was replicated when the lower deck was constructed. The plate girders beneath each deck — combined with the open-truss design on the bridge’s side that connects the two decks — resulted in a stiffer-than-anticipated span that is able to resist torsional forces.

When Othmar Ammann was asked to devise preliminary plans for a bridge to span the Hudson River, he discovered that the width of the river decreased by 1,000 feet when it passed between Fort Lee, New Jersey, and Washington Heights in Manhattan. Additionally, both locations were on geological ledges, raising them 300 and 200 feet respectively above the water level. Not only did this create an ideal geographical location for a suspension bridge, but it also gave the bridge deck sufficient height clearance for maritime traffic below.

“The structure is so pure, so resolute, so regular that here, finally, steel architecture seems to laugh.” 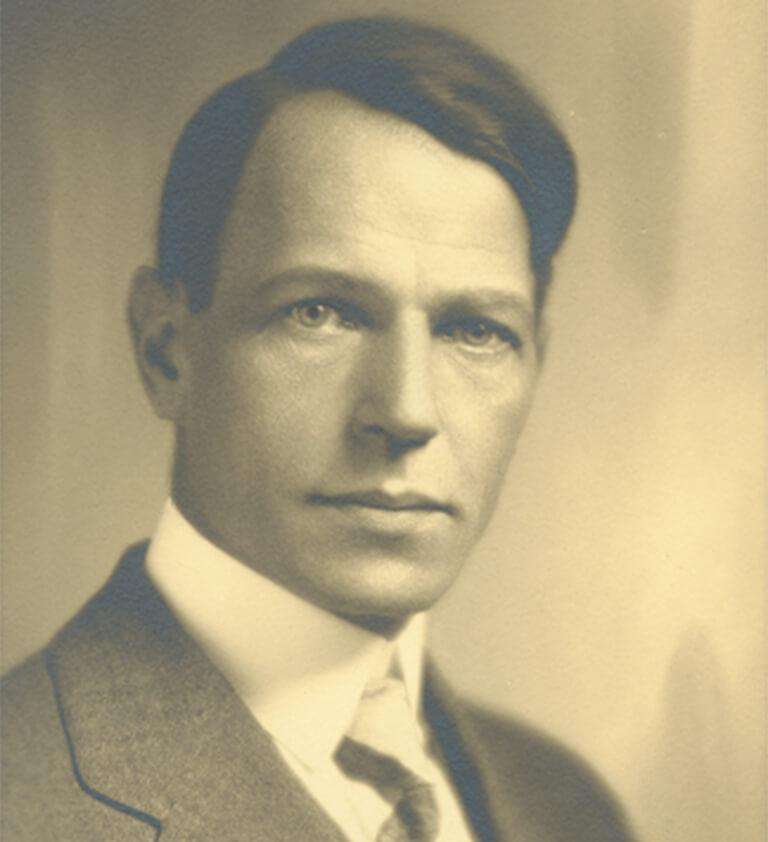 Othmar Ammann at age 43 when the George Washington Bridge opened.

The Great Depression had derailed the original plan to encase the steel structure in concrete and granite, yet the general public and several notable figures voiced an appreciation for the “honesty” of the George’s steel structure.

World-renowned architect, Le Corbusier, wrote of the George’s suspension towers: “The structure is so pure, so resolute, so regular that here, finally, steel architecture seems to laugh.” In The New Yorker, Milton MacKaye wrote that the George had established Ammann as “one of the immortals of bridge engineering and design, a genius.”

Ammann himself noted that the “sturdy appearance and well-balanced distribution of steel in the columns and bracing” gave the bridge’s towers “a good appearance, a neat appearance.” Ammann never incorporated any masonry towers in his bridge plans ever again.

One of the bridge’s features is a flag that would make its namesake proud. Since the late 1940s, the George has flown the world’s largest free-flying American flag. Measuring 90 feet in length, 60 feet wide and weighing in at 450 pounds, the flag is flown on special occasions such as President’s Day, Memorial Day, Martin Luther King Junior Day, Independence Day, Veterans Day and several other holidays. Since 2006, the flag is also raised every September 11th to honor those lost in the 2001 attacks.

Othmar Ammann was clearly a pretty shrewd guy. His design for the George Washington Bridge beat that of his own mentor, Gustav Lindenthal. Under Ammann’s direction, the George was completed six months ahead of schedule, and for less than the original $60 million budget. We’re pretty sure that were he alive today, Othmar Ammann would be a savvy CAD user, and being a gentleman who clearly liked to save time and money, he’d have taken advantage of the products that Axiom offers for MicroStation®, Revit® and AutoCAD® users.

Shave hours off a project, improve accuracy, and prevent a ton of frustration.

This range of timesaving, productivity-boosting software can shave hours off a project, improve accuracy, and prevent a ton of frustration. To find out how Axiom software can help you, call 727-442-7774 to discuss your specific situation with a friendly Service Consultant. Alternatively, for more information, MicroStation options are here, Revit tools are here, and AutoCAD assistance is here.