10th Anniversary of Arguably the Most Comprehensive Renovation Project in U.S. History

June 2021 marks the 10th anniversary of the completion of one of the largest and most comprehensive renovation projects ever undertaken — the Pentagon Renovations Project — famously (and affectionately) known as “PENREN”. If you are an engineer, architect, general contractor or CAD/BIM user, and you haven’t fully studied this project (or even if you have), you should enjoy this article.

The Pentagon Renovations Project commenced shortly after the Defense Authorization Act of 1991 and was completed in June 2011. As if PENREN wasn’t already challenging enough, in the midst of the ongoing renovations came the attacks of 9/11, resulting in a project within the project. To say the situation was extraordinary would be an understatement of magnitude.

When American Airline Flight 77 struck the western side of the Pentagon on 11 September 2001, the Pentagon Renovations Project (PENREN) had been underway for several years. The impact damaged the outer ring of one wing of the building, causing its partial collapse. Yet, in a strange (and highly fortunate) twist, the section that was struck was the only part of the super-massive building where there was even a remote possibility of there being survivors. Firstly, due to the ongoing renovation project, many offices in that section were empty at the time of the attack, which resulted in significantly fewer casualties.

If you are an engineer, architect, general contractor or CAD/BIM user, and you haven’t fully studied this project (or even if you have), you should enjoy this article.

Additionally, the portion of the Pentagon that was struck was, in fact, the one section of the building best prepared for such an incident — and this was due, in major part, to PENREN.

Part of the PENREN mandate was to structurally strengthen the Pentagon in an effort to avoid a repeat of what had occurred in 1995 when one third of the Alfred P. Murrah Federal Building was destroyed in the Oklahoma City bombing, necessitating the demolition of the building.

The portion of the Pentagon impacted by American Airline Flight 77 was the only area of the Pentagon with a sprinkler system at the time. It had also been reconstructed with a web of steel columns and bars to withstand bomb blasts, and following the impact, it held the building together for a lifesaving half-hour, allowing hundreds of people to escape to safety, before it finally collapsed. The area of impact had also already had its windows replaced with 2,500-pound two-inch thick slabs of blast-resistant glass, which remained intact during the crash and the subsequent fire.

It also had fire doors that opened automatically and newly built exits that facilitated the evacuation of that section of the building. In other words, if their goal was to cause maximal devastation, the terrorists literally chose the wrong side of the Pentagon.

. . . if their goal was to cause maximal devastation, the terrorists literally chose the wrong side of the Pentagon. 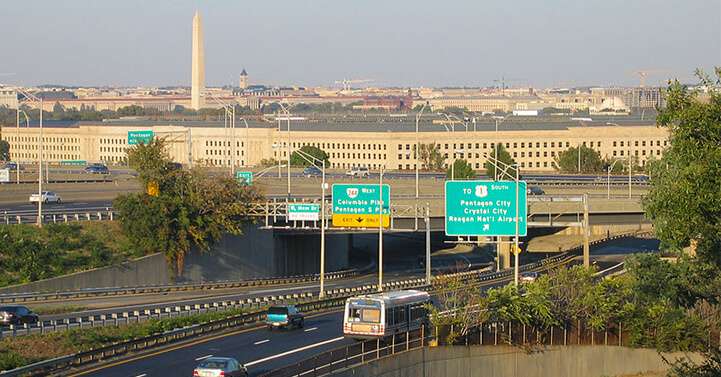 Almost two decades in the making: The Pentagon, renovated and upgraded to embrace the 21st century.

What makes the PENREN project so impressive? Well, did you know that the Pentagon is the world’s largest low-rise building? (At six and a half million square feet, we’re simply happy that we don’t have to vacuum the offices and miles of hallways.)

Describing the scale of the project, Lee Evey, who oversaw the PENREN project for five years, including post 9/11, said, “We took the building apart and put it together again, with 20,000 people sitting in it. It’s like taking apart a black-and-white TV and putting it back together again in color, without missing any of your favorite programs.”

In the aftermath of the September 11th attack, the substantial damage caused by the crash meant that the affected section of the Pentagon needed to undergo major repairs. With more than 400,000 square feet of damage, it was a massive rebuild project with a time frame of only one year for completion.

Factoring in multiple contractors and sub-contractors, all under immense time-pressure, it would have been easy for the project to spiral out of control, creating unnecessary confusion and complexity.

To avoid chaos, PENREN required that all CAD work only be done in MicroStation®. The version at the time of the project was V8 and there were large financial penalties for off-standard submissions. PENREN had very specific needs revolving around the verification, implementation and use of precisely defined CAD standards throughout the renovation effort. In an effort to maintain cohesion and standards on a gargantuan project, PENREN prudently realized they were going to need a quality assurance tool for MicroStation. They turned to Axiom for the solution.

To facilitate their desired outcome, PENREN purchased a corporate license of Axiom's MicroStation Productivity Toolkit™ for V8 — Axiom’s suite of productivity-boosting MicroStation V8 applications — ensuring that all contractors submitting design files to the PENREN program had access to the entire suite of productivity-boosting utilities, increasing both efficiency and accuracy on the project.

The area of impact had also already had its windows replaced with 2,500-pound two-inch thick slabs of blast-resistant glass . . .

One of the primary utilities that caught PENREN’s attention was SpecChecker™, a key component of Axiom’s Productivity Toolkit, and an excellent quality assurance tool. Although SpecChecker is an already robust and thorough quality assurance tool, the PENREN project had very specific requirements. Axiom therefore engineered a purpose-built, customized version of SpecChecker specifically for PENREN based on their particular needs.

The full-scale renovation became necessary by the mid-1990s because the Pentagon had never undergone a major renovation and building systems had deteriorated beyond repair, requiring complete replacement. Asbestos throughout the building also made almost any building work complex and disruptive. Additionally, the basic information system infrastructure in the Pentagon was installed long before the existence of personal computers, fax machines, video teleconferencing or digital telephone service and had simply evolved, messily, over the years, without a cohesive design plan. (Almost eighty years ago, when the Pentagon was built in 1943, there was only one telephone for every three employees. Imagine trying to function like that today.)

Over the decades, as new information technology capabilities had emerged, the new systems had simply been installed over the old. Over time, this mish-mash of technology had become unmanageable and almost impossible to upgrade. PENREN’s original plan included providing the entire Pentagon with all new and modern mechanical, electrical and plumbing systems, sprinkler systems, elevators, cable management systems (for phone and Internet), improvements in fire- and life-safety systems and more.

Why were so many contractors and sub-contractors required on the Pentagon project? Consider the scale of the project: six and a half million square feet. Then consider that the renovated Pentagon contains over 1,700 miles (2,700 km) of cabling, more than 100,000 voice, data, and video drops, 50,000 data faceplates, and 16 consolidated server rooms (efficiently reduced from the previous 70 server rooms).

Almost eighty years ago, when the Pentagon was built in 1943, there was only one telephone for every three employees. Imagine trying to function like that today.

There was a veritable mountain of work to do and it required contribution from many sectors of the industry. After 9/11, with massive damage to the already renovated portion of the building and a restrictive one-year completion schedule, multiple contractors and sub-contractors were required. Maintaining CAD standards on all the MicroStation submissions was imperative for seamless integration, which ultimately resulted in the project being completed a month early, with minimal disruption to the tenants.

Quality Assurance and Beyond

We’re grateful for the opportunity to have contributed to this historic project and to have provided the quality assurance tool that PENREN needed to achieve their goal. That tool, incidentally, much like the Pentagon, is better than ever.

Whether your projects are of a similar scale to the Pentagon or much smaller, you know that sometimes CAD standards are going to be a priority, while at other times, other elements demand precedence. If you need an excellent tool for your MicroStation project — quality assurance or otherwise — call Axiom at 727-442-7774 to speak with a friendly Service Consultant or visit the website at www.AxiomInt.com for more information.

Tools of the Trade

If you’re not a MicroStation user, but are curious about the same tool for your platform, please visit here for AutoCAD or here for Revit. Our job is to help you do your job faster and more efficiently, with better results. If something like PENREN’s enormous Phoenix Project could come in a month ahead of schedule, imagine what our tools could do for you.