Have you experienced a 3D printing flop and are looking for an explanation and solution?

We’re going to assume you’re not working with something as crazy as chocolate, pasta, concrete or diamond dust and that — for now, at least — you’re sticking to more traditional materials. Here are eight problems people frequently experience with their 3D prints, their causes and tips to overcome them.

What happened to the bottom? Why does this print look like a pile of spaghetti?

Is the printer jammed? Why is nothing coming out? Did I do something wrong?

Cause: You’ve most likely forgotten to select the proper material when slicing your print job. (“Slicing” refers to the act of converting a 3D model into a set of instructions for the 3D printer.) Selecting the correct material is a critical step. Are you trying to print a high-temperature material such as ABS (Acrylonitrile Butadiene Styrene), while the job is sliced for a lower-temperature material such as PLA Polylactic Acid)?

Tip: Always double-check your slicing settings and what spool type you have loaded. 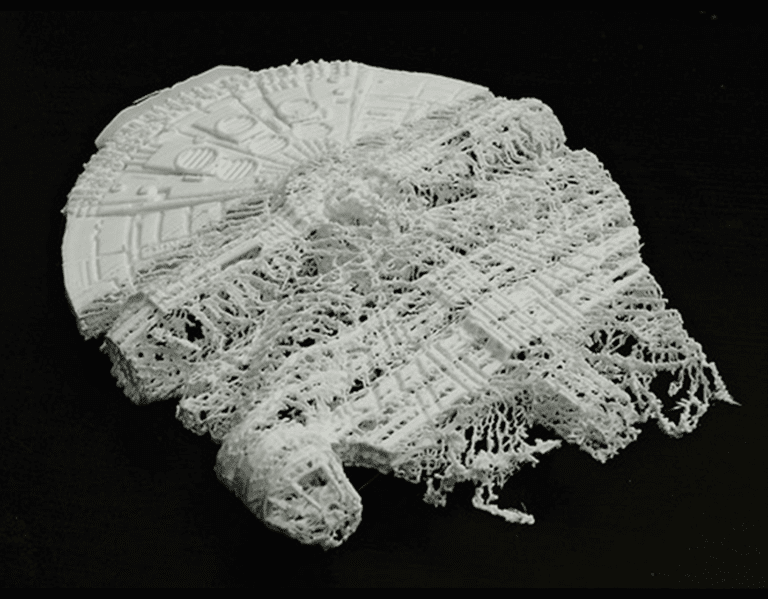 The Millennium Falcon is eerily incomplete.

If your print isn’t sticking to the bed nicely, it’s easy to conclude that the plate needs a wash, but that isn’t necessarily the case.

Cause: Sometimes, a 3D model seems to have a flat base, when it actually doesn’t. The first layer created by the slicer is therefore only a partial layer, which means the second layer is pretty much printed in the air. Result? Generally, a failed print.

Tip: You can preempt this situation by using the GCODE preview. If that wonky bottom is there, take your 3D model and quickly “plane cut” it to achieve a nice flat bottom. Upon inspection, what you’ll most likely find is that the 3D model does, in fact, have a flat bottom, but it’s tipped over — ever so slightly — which effectively means that only a corner is touching instead of the whole base. If that is the case, simply use the slicer’s option to “put this face on the bottom” to rectify the situation.

What happened to the bottom? Why does this print look like a pile of spaghetti?

Cause: Again, this is a skipped step in the slicing process. In your enthusiasm to get printing, you simply forgot to check the option to “generate support structures” in the slicer. The result is that as soon as the print reaches an overhang, it basically simply falls down with nothing to support said overhang. Go back to the slicer and turn on the option for support.

Tip: Before you start printing, always closely inspect the geometry of a 3D model to see if there are any overhangs. Then carefully consider whether your particular setup can handle them. If not, — or if you prefer to err on the side of caution — turn on the support generator and ensure you get all the unsupported overhangs covered.

Why is this thing solid? Why is there a gap in this section? Why is this so flimsy? Why did it turn out so different than what I expected?

Cause: These types of questions are invariably avoided by the simple expedient of zooming through the GCODE preview to actually see exactly what is physically going to happen during the print. You’ll generally spot where things could go wrong during the print, and you can correct them before the problem is printed.

Where the heck is the rest of it? Did I magically do an invisible print?

Tip: Make it a rule to always hit the print preview button. Use the slider to double-check how every single layer will be printed. You’ll easily spot anything crazy and avoid the frustration of a wasted print.

Where the heck is the rest of it? Did I magically do an invisible print?

Cause: This is an easy one, and it’s literally happened to the best of us. Simply put, the filament ran out and the printer kept on “printing” with no filament.

Tip: It sounds so silly, but always, always check your spool before starting a long print job. Some people weigh their spool to calculate how much filament is actually left on it. (Of course, your calculations will be more accurate if you happen to have any empty spool lying around so that you can weigh it and subtract its weight from your full spool.) Another option is to equip your 3D printer with a “filament-out” sensor that automatically pauses the job when the filament runs out, allowing you to replace the spool and continue your print. Make sure the “filament-out” sensor is actually enabled, or you’re back to square one.

There’s plenty of filament, but you’re back to air-printing. Either that or you’ve genuinely mastered the art of the invisible print. Hard to tell! 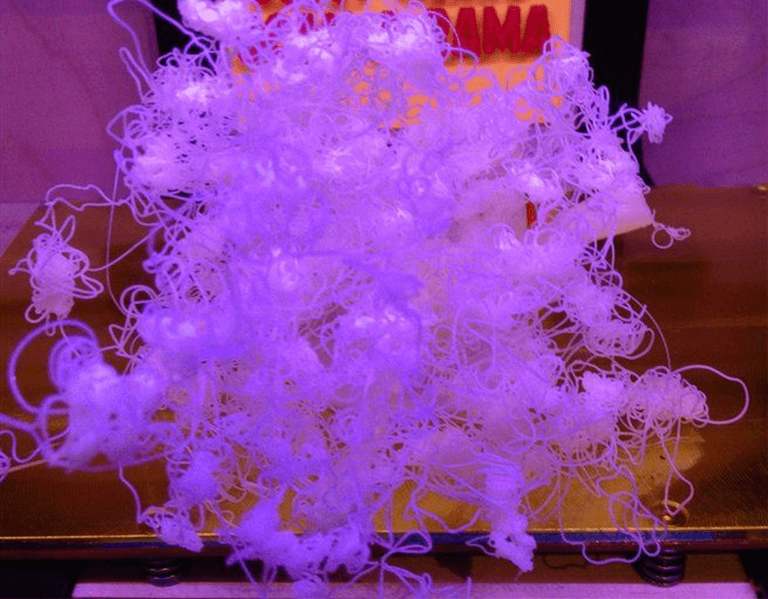 Do you see a slender-ankled woman in high heels? No? Neither did the disappointed artist, Fred Kahl.

Cause: It only takes one. Tangle, that is. All it takes is for a single strand to underlap another and although things may chug along nicely for a while, as that tangle draws tighter and tighter, the extruder starts slipping, and no filament is reaching the hot end, so it eventually gives out on you. Sorry to say, there’s nothing magical or invisible about this one. Just make sure you don’t have a loose filament end somehow getting under one of the loops on the spool.

Tip: Pay attention to the end of the filament. Either keep it in hand or stick it in the filament notch or hole on your spool. If it does somehow get loose, the coil will invariably snap back and form a tangle on the spool. Take the time to unroll the filament manually and re-spool to get it tangle-free.

Cause: Almost anything that gets hot has the potential risk of fire. 3D printers are no different. Some inexpensive models lack thermal runaway detection circuits, which allow the printer to overheat, potentially starting a fire that ruins the printer, or its environment.

Tip: Three points to bear in mind here: One, have a fire extinguisher on hand. Two, install a smoke detector near the printer itself. Three, don’t leave your printer unattended while it’s printing. Four (bonus point): Ideally, opt for a printer with a thermal runaway. Failing that, observe all of the previous three points religiously.

Whoa, this wasn’t supposed to be hollow. Why is this thing so wobbly? What’s with the weird texture?

Cause: It’s only natural to play around with the experimental features of your slicing software. You can learn a lot by trying them out. But you have to remember to turn them off afterward! Check to see if you’ve accidentally got “Spiral” or “Vase” still turned on. And that weird texture you’re getting? You’ve probably got the “fuzzy skin” setting still turned on. It was great for yesterday’s little troll you printed, but it’s not so great for a 3D model of a sports car.

CAD remains one of the most important tools in the initial stages of producing a 3D print.

Tip: Again, before you start printing, when checking your slicing parameters, cruise into the experimental section and check on all your slicer settings. Developing this simple habit will help save you a ton of time and prevent failed prints.

Hopefully, these tips have been helpful to you, and you’ll be able to troubleshoot any problems you’ve been having with your prints.

As we mentioned earlier, CAD is still a critical part of the 3D printing process and, as a CAD user, you may appreciate some software that can save you time in that arena too.

Axiom creates software that addresses the various quirks of CAD platforms such as MicroStation®, Revit®, and AutoCAD®, saving you a ton of time, ensuring improved accuracy, and virtually automating certain actions that otherwise demand a great deal of time and effort to handle repetitive manual tasks. The MicroStation options are here, Revit is here, and AutoCAD assistance can be found here. Alternatively, to discuss your particular situation, please call a knowledgeable Service Consultant at 727-442-7774.