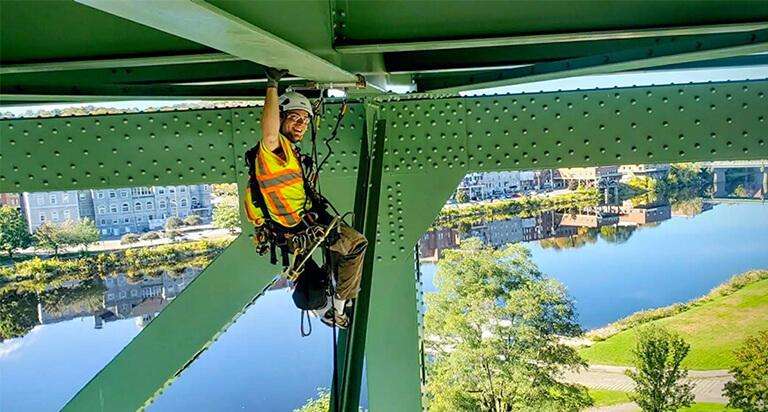 Bridge Engineers: At the End of Their Rope

Some guys design bridges. Others spend their lives clambering over and under them, dangling by a rope, hundreds of feet in the air. No, these are not Everest-wannabees. They’re not kids honing their climbing skills or trapeze artists with a Tarzan complex. Like civil engineers, these guys devote their careers to the art of the bridge, or, more specifically, in the case of the bridge inspector, to its enduring safety.

Not all bridge inspectors are engineers, much as not all engineers are climbing enthusiasts — a quality that is a requirement for the inspector, given that he’s going to spend the majority of his working life dangling above or below bridges on a slender length of rope, braced between trusses below a bridge deck as semi trucks roar by overhead or being inserted under a bridge deck in something called a “snooper” — essentially a manned bucket on articulated booms — hundreds of feet above raging, icy waters or gorges of dizzying depths.

He’s going to spend his working life dangling above or below bridges on a slender length of rope, hundreds of feet above raging, icy waters or gorges of dizzying depths.

“How do you feel about heights?” may well be a standard question during an interview for a position in a bridge inspection training program. Some inspectors are, in fact, engineers, although depending on the city or state, it may not actually be a requirement. A head for heights, on the other hand, is an absolute must given the nature of the job. 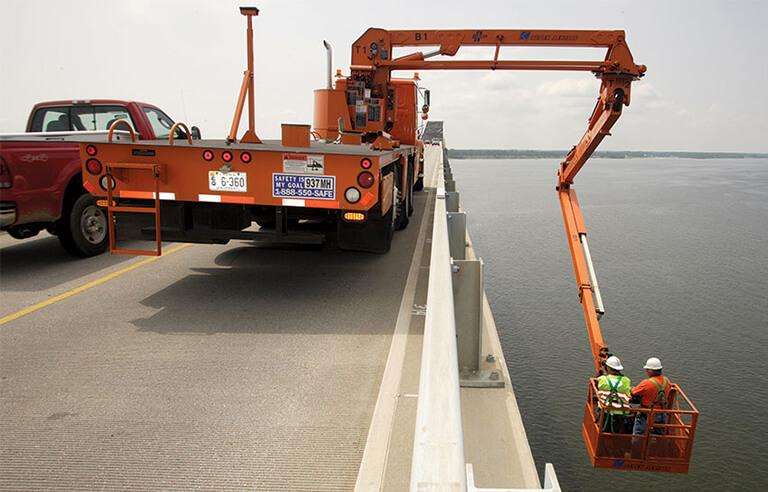 Getting ready to inspect the underside of a bridge deck from a snooper.

Other than being trained in the complexities of bridge construction principles, what and where to look, and how to interpret what you see, bridge inspectors must also acquire their “trapeze” skills. While a head for heights can’t be taught, what can be taught is the art and technique of climbing. Weeks of training are spent learning knots, ropes, equipment, technique, and safety protocols.

With a degree in Civil and Environmental Engineering, bridge inspector Joshua Sadlock, says, “A bridge is not a drawing on a page, a model on a screen or a sheet of calculations. Inspecting a bridge, up close and personal, seeing how it behaves in the wind and the waves, brings a wealth of understanding. You don’t get that working in an office.”

Who’s Inspecting What, and Why?

As with most federal policies and regulations, the National Bridge Inspection Program and Standards was born as a response to a preventable tragedy in 1967. On 15 December, the Silver Bridge over the Ohio River collapsed during the height of rush hour, claiming the lives of 46 people.

Constructed in 1928, the Silver Bridge was sufficient to carry the loads anticipated in its original design. However, at that time the average vehicle weight was 1,500 pounds. By the time of the collapse almost 40 years later, the average vehicle weight had grown to around 4,000 pounds and the amount of traffic on the bridge had increased dramatically. Deterioration during its 40-year lifespan produced an eyebar that was cracked and structurally compromised. When it finally gave out, its load transferred to its partner, which — unable to support the increased weight alone — immediately fractured.

The bridge collapsed in the early morning hours, mercifully claiming no lives other than its own.

Congress acted rapidly and by 1968 passed the Federal-Aid Highway Act, which established the standards for bridge inspection and required states to log written inspection reports. By 1971, the National Bridge Inspection Standards (NBIS) was established and is still firmly in place.

Per the NBIS, any structure longer than 20 feet that is part of the federal highway system must be inspected every two years. Over the last 50 years, the program has continued to evolve and was expanded in 1979 to include all structures on public roads.

The collapse of Connecticut’s Mianus River Bridge in 1983 and the I-35 bridge over the Mississippi River in 2007 caused a nationwide push for heightened inspection criteria and the development of a load ratings process for specific components of truss bridges. Sadly, funding for maintenance, repairs or replacement is often at the core of these disasters. 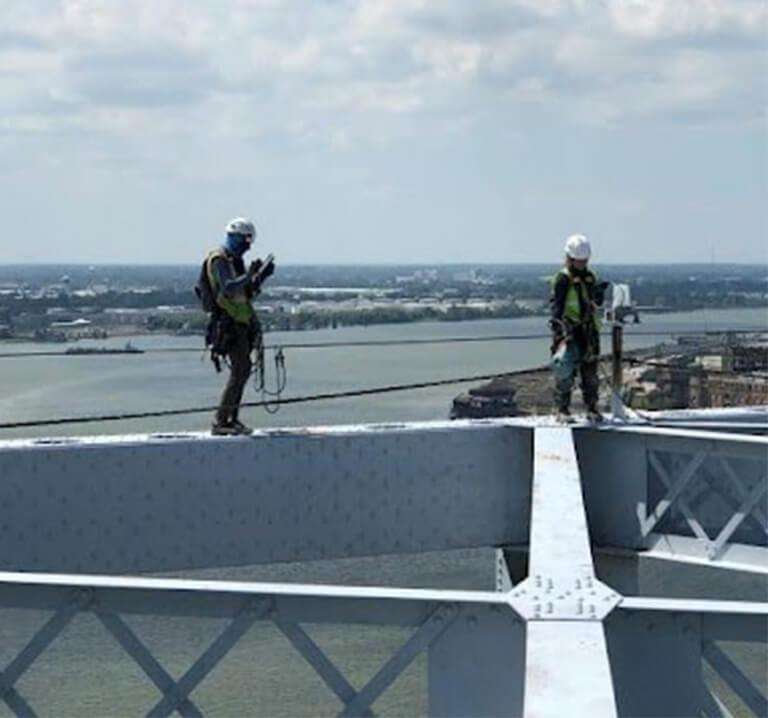 We’ve all made notes — but never in this situation. It’s just another day at “the office” for bridge inspector, Josh Sadlock.

Such was the case when the Fern Hollow Bridge in Pittsburgh collapsed under its own weight in January 2022. Funding had been a crucial issue. The K-frame structure bridge had already been placed on a shortened inspection cycle of 12 months — instead of the usual 24 — due to its poor condition. Load restrictions had been enforced, but the repairs and maintenance required in its most-recent inspection report had not been carried out. Luckily, the bridge collapsed in the early morning hours, mercifully claiming no lives other than its own.

Can Your Design Hold Up to Scrutiny?

When an engineer designs a bridge, how often does it occur to him that every two years, men will be crawling all over his bridge, literally examining every square inch, to see how it’s holding up?

What’s the easiest way to eat an elephant? One bite at a time. Hence, bridge inspections are broken down into components and elements.

The components comprise things such as the deck, superstructure, substructure, culvert, and so on, while the elements are more specific items such as the steel beams, guide rail, signage, bearings and abutments. The element items feed into the component ratings, which govern the overall bridge rating. The bridge’s overall condition rating is determined by the level of deterioration and potential impact on the structure’s load-carrying ability. These standards are national, meaning there’s no variance from state to state, and inspectors can evaluate bridges across the country, regardless of location, to a consistent standard.

When an engineer designs a bridge, how often does it occur to him that every two years, men will be crawling all over his bridge, literally examining every square inch, to see how it’s holding up?

Most of us seek solutions to problems, whether in our professional or personal lives. For bridge inspectors, it’s the other way around. They seek out the problems.

Most of us seek solutions to problems. For bridge inspectors, it’s the other way around. They seek out the problems.

On concrete bridges, spalling and exposed rebar are some of the most common defects observed. When concrete deteriorates, even fine, hairline cracks can expose the bridge’s reinforcement to the elements, as mentioned in this article that looks at the 2021 Surfside condo building collapse and this article that discusses the advantages of graphene as a concrete component. As spalling becomes more pervasive, structural integrity may be compromised. A bridge inspector, for example, will accurately measure the area of spalling to help determine the extent of the repairs required to correct the situation.

If funding is an issue, as the deterioration advances on the bridge, inspections may be mandated every 12 months or even every 6 months. Reports are generated as each bridge is inspected and its condition inventoried, and these reports are used by state and federal agencies to allocate funding.

Not only do inspections keep drivers and pedestrians safe, but they also ensure that your tax dollars are spent more efficiently and effectively.

At the End of Your Rope?

If you’re an engineer or designer who relies on MicroStation® or AutoCAD®, you’re no doubt familiar with the quirks of your platform. While both are great platforms for civil engineering, architecture, component design and so much more, you know that there are times when a particular task is repetitive, frustrating, or time-consuming.

Axiom has tools for both platforms that save you a ton of time, reduce frustration, increase accuracy, and improve the overall quality of your final product. MicroStation tools are here, and AutoCAD offerings are here. Alternatively, call a Service Consultant at 727-442-7774 to discuss your particular situation. 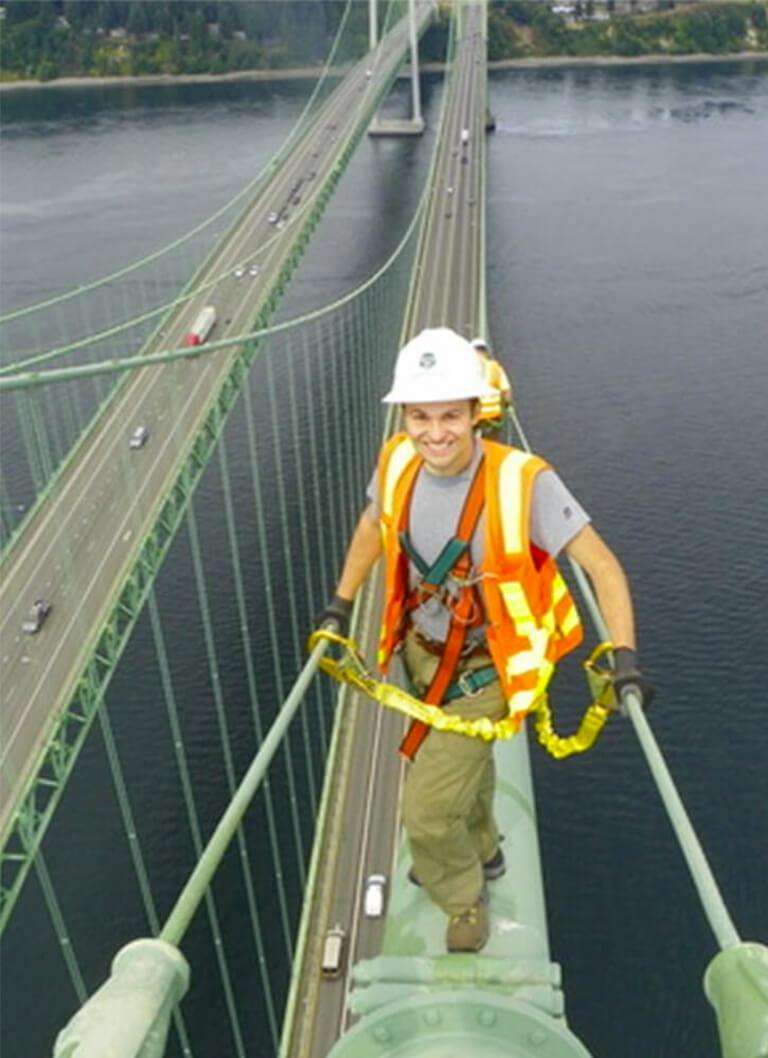 Job requirements? Start with a head for heights and nerves of steel.

The next time you feel like you’re at the end of your rope at work, just remember that for some guys, being at the end of a rope is their work.