“Wide of beam” most often refers to the impressive hips of a truly blessed woman or the width of a ship’s hull. While it’s pleasant to dwell on the former, our focus is on something more aligned with the latter, and something that is (hopefully) equally near and dear to the hearts of architects and civil engineers everywhere: the impressive width of a bridge.

Researching the world’s widest bridge proved just how competitive architects and engineers can be. Australia’s Sydney Harbor Bridge held the title for around 80 years. Then Canada claimed the title for the Port Mann Bridge in British Columbia. California’s San Francisco-Oakland Bay Bridge soon beat out Canada, and while we’ve all heard that everything is bigger and better in Texas, in this particular arena, it’s China that has everyone beat. Or at least, that’s the prediction for August 2023.

Researching the world’s widest bridge proved just how competitive architects and engineers can be.

The Sydney Harbor Bridge is a steel through-arch bridge that carries not only vehicles but also two railroad tracks, a bicycle path, and a pedestrian walkway. It claimed the world title for the widest bridge — 160 feet — upon its completion in 1932. 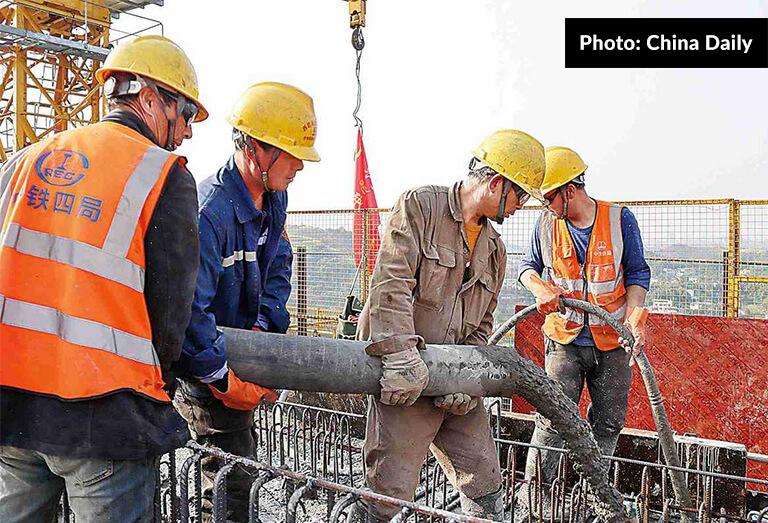 Another day of cement pouring on one of the piers on the Tuojiang super bridge.

Eighty years later, the Port Mann Bridge in Canada’s British Columbia opened to traffic in 2012. This cable-stayed bridge carries 10 lanes of traffic, with space reserved for a light rail line. Measuring 213 feet in width, it victoriously eclipsed the Sydney Harbor Bridge for about a year, before being beaten by a beast of a bridge in San Francisco.

The eastern span of the San Francisco-Oakland Bay Bridge in California measures 258.33 feet wide, making it wider than all previous contenders, and putting it firmly in first place. The graceful suspension bridge comprises ten lanes of traffic and was completed in 2013. It has held the title for almost a decade, but in 2023, if all goes according to plan, it will need to move over for a new contender.

So, what’s beating the beast?

The as-yet-unnamed bridge (currently referred to as the Tuojiang super bridge) across the Tuojiang River in the Sichuan province of southwest China promises to surpass any other bridge that’s ever held the title of “widest bridge on Earth.”

This new bridge could hold a full-size football pitch crossways. When it opens to traffic, it will be over a thousand yards long and, at 284.4 feet wide, will definitively qualify as the widest bridge in the world. It took only an additional thirty feet — the length of a football end zone or two average giraffes — to relegate the San Francisco-Oakland Bay Bridge to second place.

In China, the pouring of the concrete piers was completed earlier this year, and construction is currently focused on the deck. The design — a double-column V-shaped bridge tower on two main piers — is the first of its kind in China. The two piers required 23,000 steel bars to be encased in concrete poured into 69 forms of various shapes and sizes. Contractors are working 24 hours, around the clock, on full-time day and night shifts, and the bridge will hopefully be open to traffic by August 2023.

The new bridge could hold a full-size football pitch crossways.

The bridge forms part of the 435-mile Beijing-Kunming High-Speed Railway Corridor project, designed to improve the mobility and speed of travel for residents along the line, both by vehicle and a high-speed rail that will travel at around 218 miles per hour. 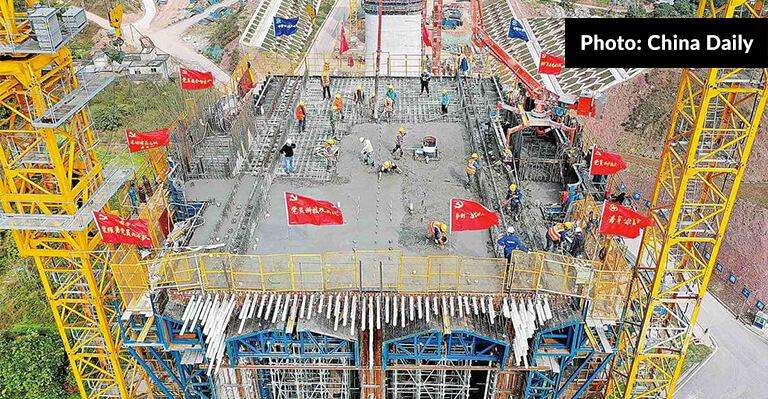 Construction of the main pier of the Tuojiang super bridge. Workers are operating 24 hours around the clock to complete the bridge by August 2023.

If you’re a bit of a speed freak, you may enjoy Axiom’s array of tools that can certainly grease the rails of your chosen CAD/BIM platform. Banish those repetitive tasks that chew up your time and are a frequent source of stress and frustration.

If you want tools that speed up your projects, the MicroStation® menu is here, the Revit® repertoire is here, and all things AutoCAD® are here. Alternatively, call a Service Consultant at 727-442-7774 to help determine which tools are the best fit for you.

We can’t promise 218 miles per hour, but you won’t believe how much time you can save with purpose-built tools at your fingertips. What will you do with all that extra time on your hands?