Does the design of a new construction project in the Middle East foresee the structure of future societies, or is it just a "castle in the sky"?

Would you opt to live and work in a home that was part of a single-structure city, along with nine million other folks? How about if we told you it was located in the Arabian desert? We’d love to tell you that it included romantic evenings in a Bedouin tent with a belly-dancing exotic beauty and a dashing hero, a la Lawrence of Arabia. But it’s far more futuristic than that. At Axiom, we’ve long maintained that CAD/BIM managers and users are the authors of our future. Architects, engineers, and designers turn great visions and dreams into soaring realities and should therefore be helped and supported. This is why we produce CAD and BIM tools for MicroStation®, Revit®, and AutoCAD®. If we can help save time, reduce frustration, and help you deliver accurate, standard, valuable projects, then our work is done.

A controversial project in the Middle East has clearly pitted CAD/BIM designers and members of the AEC industry against the confines of modern reality.

A controversial project in the Middle East has clearly pitted CAD/BIM designers and members of the AEC industry against the confines of modern reality in thought-provoking ways.

But are they crossing the line between reality and fantasy?

The Scale of a City 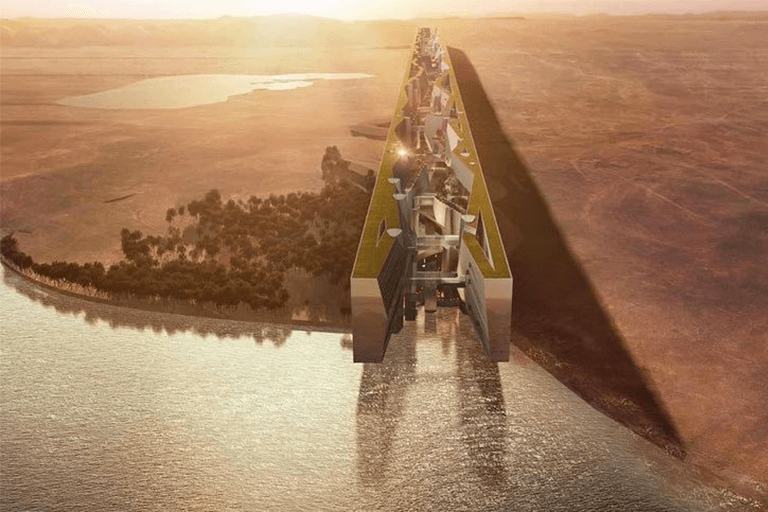 The Line consists of two parallel structures contained within a mirrored glass exterior.

In 1624, the Dutch settled along the Hudson River, establishing New Amsterdam, which the English later renamed New York. Today, at its widest point, the Big Apple measures about 35 miles across.

On the opposite coast, in 1781, a small settlement named El Pueblo de la Reina de Los Angeles (The Town of the Queen of Angels) was established as part of Spain’s colonization of California. Today, that city, Los Angeles, measures around 44 miles at its widest point.

But earlier than both of these large American cities — much earlier, in fact, — the Romans settled on the banks of the River Thames around 45 A.D. They called their little settlement Londinium. Today, the sprawling city of London has grown to a width of around 50 miles, east to west.

It’s a law of nature that things start out small and then grow. The tadpole becomes the frog; the acorn, the mighty oak, the settlement becomes the sprawling metropolis, and in the Middle East, well, that’s where this theory goes to hell in a handbasket.

They’re building a city that will be 105 miles long right from the get-go. That’s larger than the growth spanning almost two thousand years of civilization in London. But — and here’s where it gets weird — it will only be about 660 feet wide. (For those readers who are metric, that’s 170km by 200 meters.) “That’s not a city,” you say. “It’s a sliver, a slice, a shard.” True, but since The Shard was already taken (by a building in London), they’re simply calling it The Line.

In the desert wilderness of northeast Saudi Arabia, where temperatures can reach up to 108ºF (42ºC) in the Tabuk province, they’re building a new city known as Neom. There’ll be a new seaport, two airports, an industrial city, 16,000 acres of farmland, and an outdoor ski destination located in the nearby mountains.

But it is the project known as The Line that is capturing imaginations and triggering controversy around the world.

The newest designs were made public in July 2022. The original plans were for a city comprised of multiple buildings on a linear plan, but the new designs have consolidated this concept into one gigantic, singular structure contained within mirrored “walls” or cladding.

The tadpole becomes the frog; the acorn, the mighty oak, the settlement becomes the sprawling metropolis, and in the Middle East, well, that’s where this theory goes to hell in a handbasket.

The architects’ renditions show a breathtakingly inspired new way of living, with no cars, no streets, and no carbon emissions. And an anticipated population of nine million souls. That’s more than Madrid, bigger than Baghdad, and nominally larger than New York City. The relevance?

How is this possible? We told you the structure would be 105 miles long and 660 feet wide, but we forgot to tell you that it would also be over 1,640 feet (500 meters) tall, which means The Line could be around 100 floors tall, or more. (We don’t envy the window-washers. Nope, not one bit.) 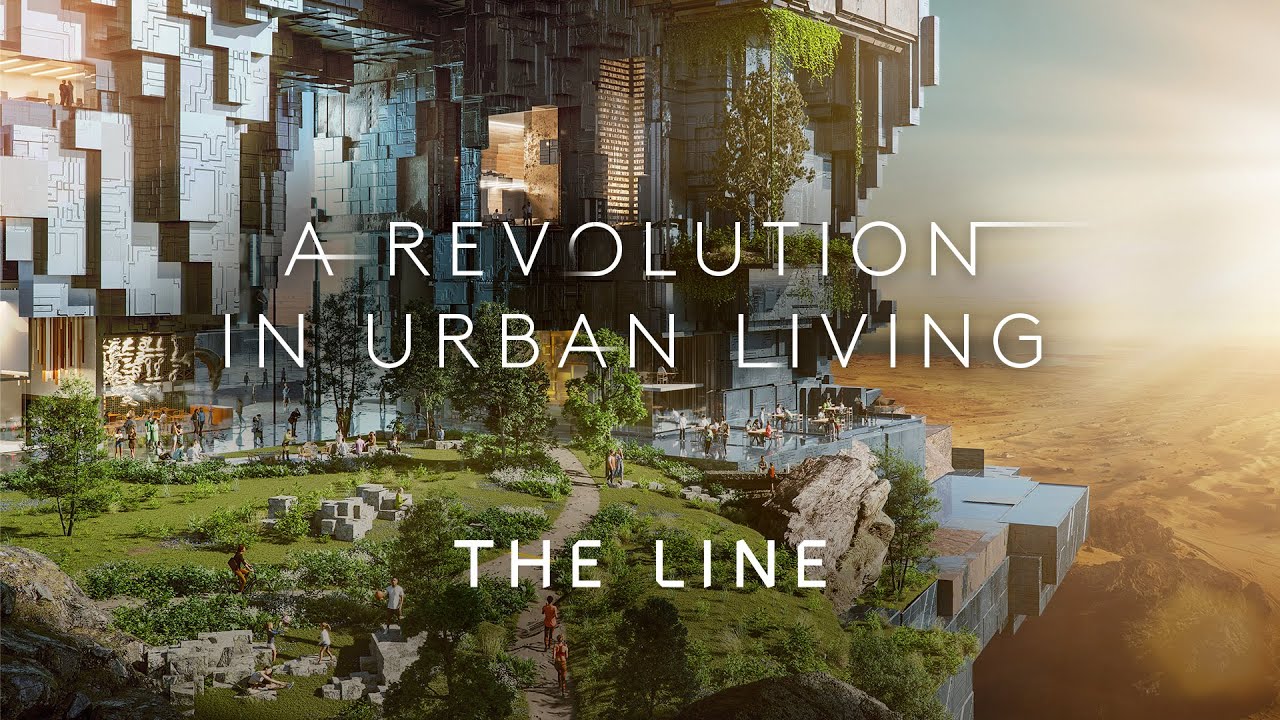 “Visionary” is a word perhaps too easily bandied about, but one look at the overall design and aesthetic of The Line and “visionary” seems entirely appropriate. While the design perhaps borders on genius, the ultimate focus is not on the nuts and bolts of the structure, but on the humans who will live here. Health and well-being are being prioritized over transportation and infrastructure.

The city will run on 100 percent renewable energy and 95 percent of the surrounding land will be preserved for nature. Virtually all everyday necessities will be available within a five-minute walk from your front door, although we’re going to assume there will ultimately be a series of parking garages for those who wish to retain a vehicle for venturing out from The Line. An underground high-speed rail system can shuttle residents the entire length of the city in about 20 minutes.

Naysayers have dubbed the project too futuristic and dystopian. All we can say is that if we’d been around a hundred years ago and someone had told us that one day we would carry a pocket device through which we could access a universe of data, images and film footage, make phone- and video-calls to people on the other side of the world, take photographs, listen to music, do our banking, book a medical appointment or a haircut, we’d likely have said the same thing: “Too futuristic and dystopian. It’ll never catch on.” And we’d have been dead wrong.

Are they crossing the line between reality and fantasy?

All we can ask of the detractors is to give the future time to breathe and grow.

How Can We Help You?

If you’re a builder of futures, our goal is to support you in those endeavors. To that end, we create productivity-enhancing tools designed to save time, avoid repetitive tasks, reduce frustration, improve accuracy on projects, and get you home on time.

Prefer to discuss your situation with a seasoned pro? You can pick the brain of a friendly Service Consultant at 727-442-7774. Solutions may be the name of our game, but our primary goal is to add more time to your day.