Can 3D Printing Improve the Air We Breathe?

The impressive innovation in the area of 3D-printed materials and objects expands daily, as can be seen here and here. Recently, a number of artificial coral reefs have been 3D-printed, with the goal of reestablishing the abundant biodiversity that exists around coral reefs. These are robust creations, designed to replace dead coral, and replicate an environment that can be colonized by a variety of marine creatures. But in Hong Kong, there’s a new type of 3D-printed product being tested, which may, in fact, contribute to the quality of the air we breathe.

About 25 percent of the ocean’s fish (and about a billion people) depend on healthy coral reefs for their survival.

Coral reefs are often referred to as the “rainforests of the sea,” since roughly 25 percent of the ocean’s fish (and about a billion people) depend on healthy coral reefs for their survival. Unfortunately, there’s a correlation between our threatened reefs and the rising carbon dioxide levels in our atmosphere, neither of which bode well for life on Earth. A recent innovation in design has the potential, excuse the pun, to make waves. Let’s see what happens when marine scientists get jiggy with CAD and 3D printing. 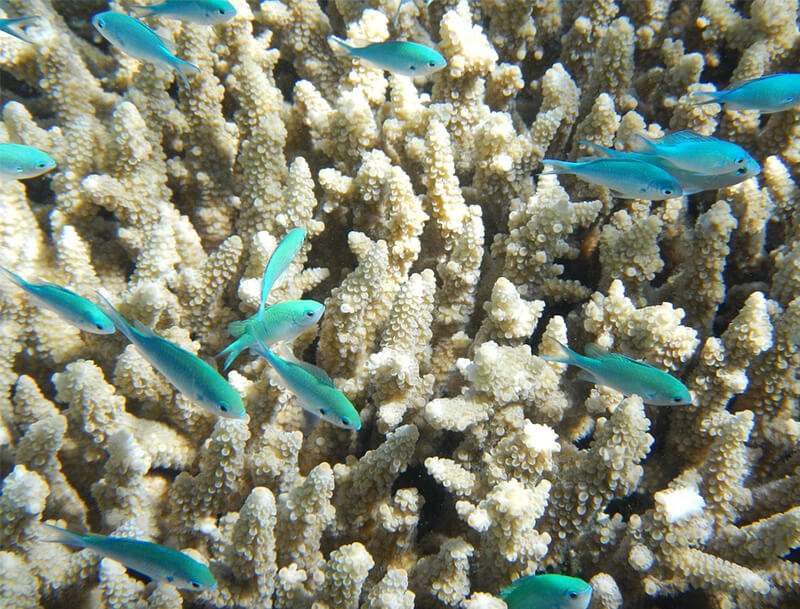 Corals do more than host an amazing array of marine life. They also retain carbon dioxide and help maintain a healthy balance in our atmosphere.

“Sometimes, all I need is the air that I breathe and to love you.” We’re willing to bet that back in 1974, The Hollies had no idea that their hit song could potentially be an anthem for the earth and the oceans, a plea for the wellbeing of the thin layer of breathable air that surrounds our small blue planet and everything contained within it. Now, almost half a century later, we’re talking about the effects of global warming, climate crisis, and carbon emissions. We recycle; we plant trees; we opt for electric vehicles, and purchase recycled and repurposed goods. And we hope that every little bit helps. Believe it or not, through the magic of CAD and 3D printing, we may be able to make more of a difference than previously thought.

One of the biggest issues Earth-dwellers are faced with is the rising level of carbon dioxide. Who’d even heard of a carbon footprint twenty years ago? Now, everyone from your local neighborhood coffee shop to massive retailers such as Amazon is pledging to reduce their carbon footprint. Using CAD, a couple of savvy scientists have devised a clever product that may contribute to reducing rising carbon dioxide levels.

The Skinny on Fat Carbon

Carbon dioxide. It’s the stuff we exhale, as do volcanoes, hot springs, and geysers. It’s also released into the atmosphere by the burning of coal, petroleum and natural gas, better known as fossil fuels. Sadly, wildfires also contribute with growing frequency. So, how much carbon dioxide, or CO², is in the air we breathe?

Most of the Earth's atmosphere consists of a mix of five gases: 78 percent nitrogen, 20.9 percent oxygen, 0.04 percent carbon dioxide, 0.93 percent argon and variable amounts of water vapor. In the case of the carbon dioxide, that 0.04 percent doesn’t sound like much, but even small changes in CO² levels can produce dramatic change. Why?

The Great Barrier Reef is the only animal construction on Earth visible from space.

We’ve heard about greenhouse gases seemingly forever, but do we know exactly what they are, or what carbon dioxide’s role is? Here’s a very brief outline. 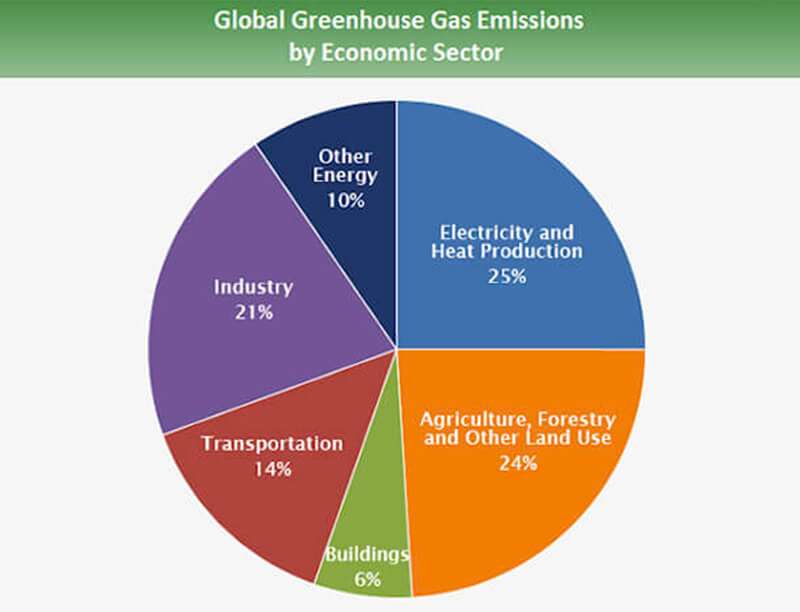 Carbon dioxide is the most important gas for controlling Earth’s temperature. It absorbs a wide range of energy, including infrared energy (heat) emitted by the earth, and then re-emits it. This re-emitted energy travels out in all directions, with some returning to Earth, where it heats the surface.

Without any greenhouse gases, Earth would be an icy wasteland, with temperatures hovering around 0° Fahrenheit (-18° Celsius). Greenhouse gases keep our planet livable by holding onto some of Earth's heat energy so that it doesn't all escape into space. This heat trapping is known as the greenhouse effect. With dramatically increased greenhouse gases, Earth could resemble Venus, which hovers at a balmy 750 degrees Fahrenheit or 400 degrees Celsius. (Let’s face it: No amount of air-conditioning is going to handle that.)

In addition, the rising temperatures caused by increased CO² mean increased surface-water evaporation. Higher levels of water vapor rising into the atmosphere simply exacerbate the greenhouse effect. So, maintaining a stable, non-life-threatening level of CO² is key. Scientists discovered that carbon dioxide, even at only 0.04 percent, is, in fact, the gas that “sets” the temperature of Earth, as it controls the amount of water vapor in the atmosphere, and thus the size of the greenhouse effect.

Carbon dioxide is not only in the air we breathe. The global carbon cycle is the exchange of carbon dioxide between the earth’s atmosphere, land, oceans, and fossil fuels, all of which emit and absorb CO². Think of it as the earth, itself, breathing: inhaling and exhaling carbon dioxide. The goal, so that life on Earth continues as we know it, is simply to not have too much of it being exhaled. 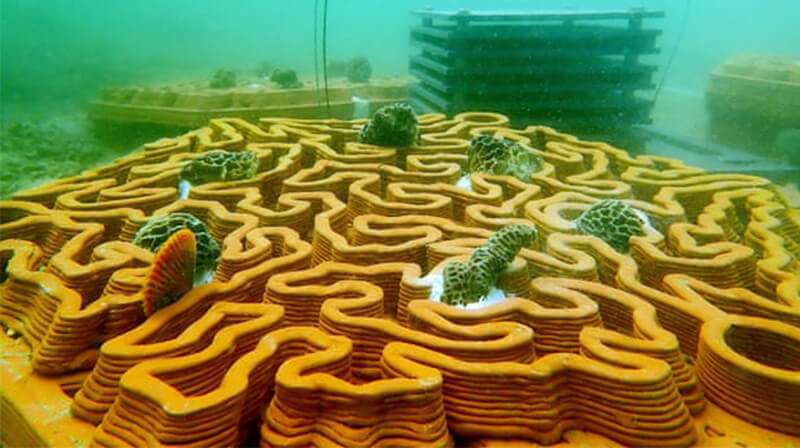 Any discussion of carbon emissions will, at some point, include the topics of sequestration and carbon sinks.

Sequestration is a process involving the long-term removal or capture of carbon dioxide from the atmosphere to slow or reverse atmospheric carbon dioxide pollution, which helps to mitigate climate change.

A carbon sink is any reservoir — natural or otherwise — that accumulates and stores, or sequesters, carbon dioxide for an indefinite period, lowering the concentration of CO² in the atmosphere. Think of a carbon sink as a sponge that soaks up carbon dioxide. The two most important carbon sinks on Earth are vegetation and the ocean, which is why interest groups urge us to save the rainforests and protect the oceans.

Carbon dioxide that is held by terrestrial (land-based) ecosystems is known as green carbon. Carbon that is contained by oceanic and coastal ecosystems (by algae, corals, seagrasses, mangroves, salt marshes and so on) is referred to as blue carbon. Since 71 percent of the earth is covered in water and 97 percent of it is saltwater, it’s easy to see why coastal and marine ecosystems form an integral part of the solution to global climate change.

Corals are actually invertebrate (lacking a backbone) creatures that survive largely by feeding on algae that live inside the coral, producing energy from sunlight. This is why most corals are found in fairly shallow, temperate waters. However, an increase in temperature or in oceanic acidity levels can force the coral to expel the algae. This results in the coral losing its food source, causing the coral to slowly starve to death, an event known as “bleaching.”

3D printing may, in fact, contribute to the quality of the air we breathe.

Another factor threatening coral reefs, globally, is ocean acidification, which is a result of carbon dioxide building up in our atmosphere. It’s easy to see why anything that can hold or sequester carbon is therefore potentially valuable.

All Coral Reefs are Not Created Equal

Coral reefs form part of the blue carbon sequestration process and are therefore vital to the health of our atmosphere. While 3D-printed reef replicas are good for marine biodiversity, they do not aid in the sequestration of blue carbon. 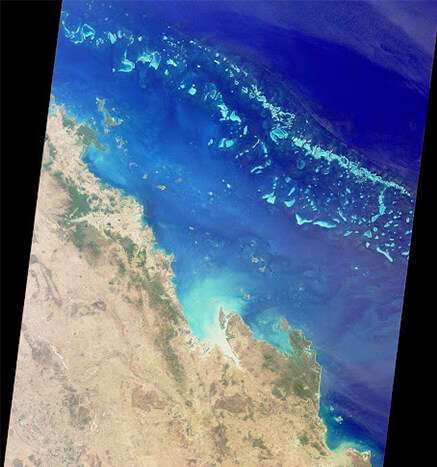 Enter David Baker, a marine biology professor, and Vriko Yu, a PhD student, both at Hong Kong University. Although Hong Kong prides itself on its incredible biodiversity, and the ocean surrounding Hong Kong sports more coral species than the Caribbean, the corals are under severe threat from pollution and urban development. With a clever plan in mind, the two scientists created a company, archiREEF, with the intent of 3D-printing tiles that are specifically designed to improve coral growth.

Unlike the artificial reefs that are being printed as environments to host marine life, the archiREEF tile, made of terracotta clay that will erode over time, is specifically designed to improve and enhance coral growth.

In 2020, archiREEF installed 130 tiles on the seafloor in a local Hong Kong marine park. The initial feedback on the tiles is positive in terms of coral restoration, but the site will be monitored closely for at least two years. What’s most impressive is that a staggering four times more coral is surviving on the terracotta tiles compared to conventional artificial reefs.

While coral reefs are not, by any means, the biggest reservoirs for carbon dioxide, they nonetheless play an important role, holding approximately 70 to 90 million tons of carbon per year.

Did you know that Australia’s Great Barrier Reef — spanning 1,430 miles (2,300 kilometers) — is the only animal construction visible from space? That gives you some idea of its scale. A team of Australian scientists recently discovered that the seagrasses of the Great Barrier Reef are absorbing climate-warming carbon dioxide from the atmosphere at a surprisingly high rate. In particular, the reef’s deepwater seagrass beds, spanning a region approximately the size of Switzerland, are carbon-removal powerhouses, perhaps locking away up to 30 million tons of CO².

This clearly illustrates the importance of protecting both coral reefs and their environments in an effort to improve global air quality.

Who would ever have thought that a 3D-printing project in the ocean could potentially protect and enhance the air we all breathe? In the hands of clever CAD users, clearly, the sky is the limit.

Speaking of clever CAD users, we believe you’ve chosen one of the noblest professions: quietly shaping the future. You deserve all the help and support you can get, especially if it makes your work life easier and potentially gets you out of the office sooner. Regardless of your choice of platform — Revit®, AutoCAD® or MicroStation® — you know that while your platform gets the job done, it has its fickle, quirky moments. You know what we mean, because you deal with it every day: the frustration of repetitive manual tasks that chew up hours of your time — hours that could be spent either working on actual design, or, better yet, getting away from your computer to do the things you enjoy the most.

We can’t change your CAD/BIM platform. We can change how much time you spend on it.

If you want to complete projects quicker than a coral takes to a terracotta tile, please call a Service Consultant at 727-442-7774 to help establish which tools are best for you, or visit us on the web. MicroStation tools are here, Revit tools are here and AutoCAD is over here.

We can’t change your CAD or BIM platform. We can change how much time you spend on it.